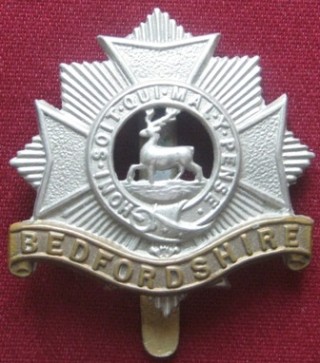 Pte Arthur Stone, a reservist in the 1st Bedfordshire Regiment and a gas fitter working for the Bishop’s Stortford, Harlow and Epping Gas and Electric Company of Bartholomew Road, was found by soldiers with a gunshot wound in left shoulder. He was home on sick leave from the front and was due shortly to report himself.

Statement From his Wife

In court on 8 May 1915, it was reported that he had been charged on 11 February 1915. He appeared in court in uniform with his left arm in bandages.  Mrs Florence Margaret Stone, the defendant’s wife, stated that her husband was a private in the 1st Bedfordshire Regiment, rejoining the army on the outbreak of war having previously been in the 13th Hussars, from which he was discharged in 1908 as being medically unfit.

Her husband went to France with his regiment and after being in the firing line about two months returned home at the end of January on sick leave. When he came home he seemed very ill, did not get much sleep, had nightmares, and could not sleep as he seemed afraid that something would happen. He used to get out of bed and walk about.  During the daytime he seemed alright provided she was with him but used to sit with his head in his hands.

On the night of Wednesday February 10th he did not sleep and on getting up the next morning had no breakfast, only having a cup of tea. At that time Mrs Stone also had a soldier billeted with them. A little before ten o’clock, she went upstairs when she heard a noise and on coming down at once saw her husband lying on the floor. Mrs Stone at first thought that he had fainted, but as he did not speak she did not know what was the matter. She then noticed a hole in his clothes, sent for a neighbour and the doctor after which her husband was taken to the Hospital. She also saw a gun lying on the table in front of the window.

Dr Newman said he saw defendant in the Hospital when he was suffering from a gunshot wound in the left arm and shoulder. The bone was shattered and the bullet had passed out through the left shoulder blade.  The man was suffering from loss of blood and shock due to the wound.  He was still far from well.  When brought to the Hospital he was suffering from neurasthenia though he was much better now in that respect.  The Chairman stated that there is no proof who shot the gun because the doctor knows nothing about that.  He asked the doctor, ‘What state of health is he in now?’ Dr Newman replied, ‘He is recovering and is in a state of convalescence both as regards neurasthenia and his wound, but is not yet quite himself.’

The Chairman said that up to now nothing had been said as to who fired the gun. Inspector O’Connor now stationed at Watford, said that on the 11th February about a quarter past ten, he received information of a man having shot himself at 37 Bartholomew Road. He proceeded there at once and found the defendant in the kitchen lying on his back.  He had a wound in his left shoulder.  Dr Beckett Truman came soon afterwards and rendered first aid, after which the defendant was removed to the Hospital.  On the kitchen table, Inspector O’Connell saw a rifle belonging to a soldier billeted at this house at the time with a piece of string about four yards long attached to the trigger. He also noticed on the opposite window about 3 ½  to 4 ft from the ground a hole in the wall and also saw a dent in the woodwork at the edge of the window. In a box he found a spent cartridge, one from which the cordite had evidently been removed, while in the rifle he discovered another spent cartridge.  The Chairman said ‘I understand all this but it does not prove who shot the gun.’  Inspector O’Connor replied, ‘There was no one else in the room at the time.’  Supt Foster said that was all the evidence he had to call, as a soldier who would have been a witness and Dr Truman had now left the town.

The Bench consulted and the Chairman, addressing Mrs Stone, said ‘You think you will be able to keep a good eye on your husband now he is getting stronger and that everything is all right?’ Mrs Stone replied in the affirmative and the Chairman proceeding said the Bench were also going to ask their Clerk (Mr W J Gee) to see the head of one of those organisations – the Soldiers’ and Sailors’ Families Association or something  – who would also look at the case.  The Magistrates would not go any further but hoped that the defendant would try and give no more trouble and that he would get well and strong again and they hoped they would hear nothing more like that again. The defendant was told that he could go.  He said ‘Thank you sir, I will try.’