You are here: Home>Hertfordshire During the First World War Learning Resource>For King and Country>War on Film 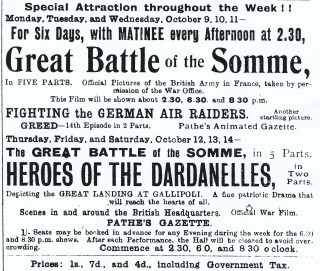 What is being advertised here ?

Who has given permission for the film to be made ?

Why do you think the film was made ?

What impact do you think this has on the film ?

What language is used to describe the film ?

How does the language reflect the attitudes of the time ?