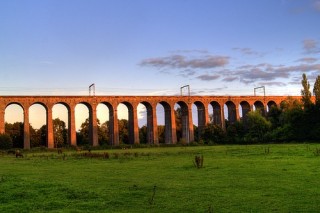 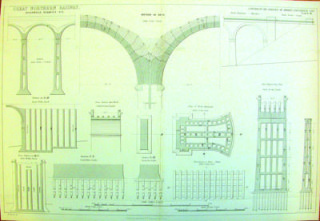 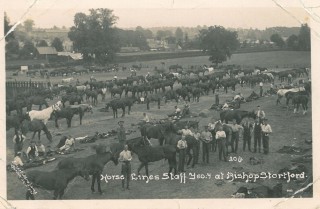 Horse lines of the Staffordshire Yeomanry at Bishop's Stortford
BISHM 566

However, there were some alarms, in particular the appearance in several locations of an alleged German spy, who dressed in a variety of disguises. The first mention of him is on 26 August 1914 in a copy of telegram from a naval centre in Hull: “A German spy in the uniform of a boy scout..fully armed” gave a sentry a drug, pills and liquors. He was reported to be a “most dangerous character, fully armed going south, a motor car accompanied by a motor cycle ridden by an alleged German spy” and “when challenged fired at  the constable” Further reports noted a “man representing himself as a scout master selling pills and liquor to sentry”.

The man continued south, and on 28 August there were reports of a motor cyclist coming from Hitchin who, when challenged, drew a pistol and rode off to the railway station. He was described as of “medium height, moustache, macintosh overalls, leather helmet” The following night, sentries guarding the Digswell viaduct were alarmed by gunfire and started firing indiscriminately. On 5 September, a report copied to all police stations, stated: “Rickmansworth report of a motor cycle ridden by alleged German spy near Amersham -when challenged were fired at – supposed to have gun and gone in direction of Bucks.’ As a result of the ‘strange affair’ in Hitchin, the District Council pronounced a need to protect the engine house.

This was not the only spy scare. In September 1914, men were reported wanted for ‘entering Northchurch signal base’. The men had attempted to murder the signalman, who was knocked unconscious and the telephone was smashed. Two men were involved, both aged about 40, one of whom carried a large knife. The other ‘had the appearance of an undergraduate.’ The following January, there was a report of a man with binoculars, believed to be a German spy, who was ‘asking questions of different places round about’. This man had a fair moustache turned up at the ends.

The local police had other events to deal with during this period. There were complaints about lunatics, a trainload of wounded at Bishop’s Stortford, and again in Bishop’s Stortford a stampede of 200 horses. This last was thought to be linked to spying activity or other treachery.