You are here: Home>Hertfordshire During the First World War Learning Resource>Taking a Stand Against War>Appeal Tribunals 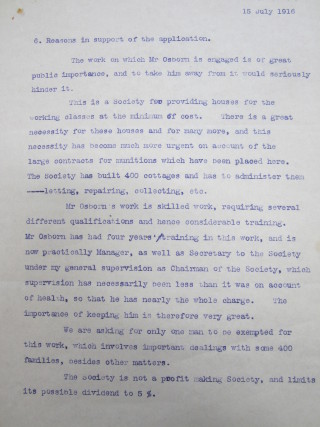 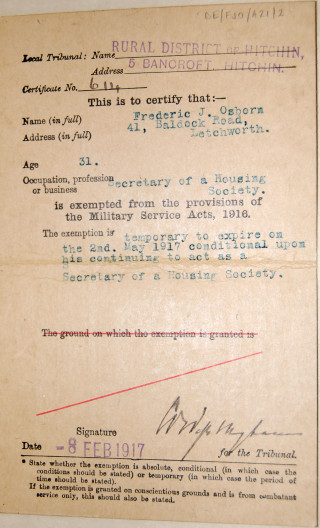 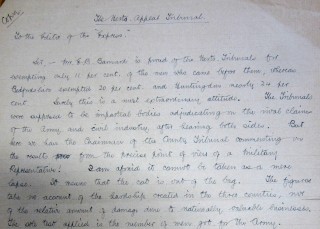 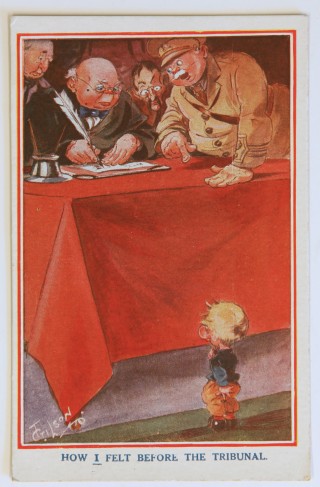 The first document is a letter of support for Frederic J Osborn’s appeal against his call up to the army. It is written by his employer at the First Garden City in Letchworth.  What reasons are given that Osborn should not go to war ?

How is Mr Osborn’s work described ?

What was Mr Osborn’s role at the [Howard Cottage] Society and why has his role expanded ?

How many families would be affected by the Society’s work ?

Do you think this is a convincing case ? Would you grant Mr Osborn an exemption ?

Look at the second item. What is it ?

When was it granted and for how long ?

After this time, Mr Osborn would have had to re-apply for exemption.  Do you think this was a good system ?

Have a look at Osborn’s letter to the editor of The Express newspaper. What does he say about Hertfordshire’s Tribunals in comparison with other counties nearby ?

Why does he believe that the Hertfordshire Tribunals are biased ?

What does he say the Tribunals are disregarding ?

And what does he say that the Tribunals believe to be their only measure of success ?

Do you think this was a risky letter to write ?  Why ?

Do you think it was published and if so, what do you think the public reaction would have been ?

Finally, have a look at the cartoon.  How does this support Osborn’s point of view ?