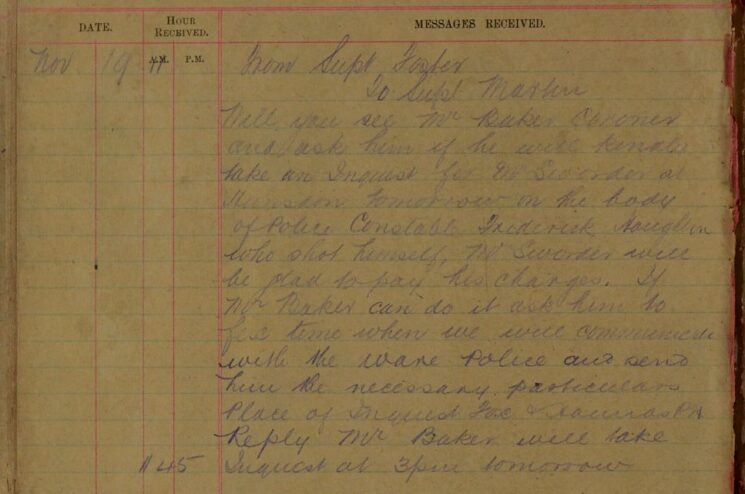 From Superintendent Foster to Superintendent Martin – Will you see Mr. Baker Coroner and ask him if he will kindly take an Inquest for Mr. Sworder at Hunsdon tomorrow on the body of Police Constable Frederick Houghton who shot himself, Mr. Sworder will be glad to pay his charges. If Mr. Baker can do it ask him to fix time when we will communicate with the Ware Police and send him the necessary particulars. Place of Inquest Fox & Hound P.H.

[Herts & Cambs Reporter & Royston Crow 27 November 1903 – Suicide of a Policeman at Hunsdon. On Wednesday afternoon in last week the inhabitants of the little village of Hunsdon were much shocked by the suicide of the local Constable, PC Frederick William Houghton, who shot himself through the heart with a gun. Houghton had been in the Force twelve years and bore a most exemplary character. He had been at Hunsdon the last eight years. He was a native of Arlesey and 34 years of age. At the Inquest on Friday the Jury returned a verdict of suicide whilst temporarily insane. The deceased leaves a widow and three children. Ed.]

Incidents recorded on this page

You can carry out an advanced search of the documents by search term.

Incidents in the documents

View all types of incident